Here was a show that I was most dissatisfied with when originally broadcast, and which had the most negative feedback.  That stuck with me, and I was determined to make it better.  Only you, the audience, can tell us that, of course.

Most of the content is new, and the notes were completely reworked.  Circumstances led to the show not being edited down, and all three sections were longer than usual – but nobody complained.  Malaclypse had some problems with his brand-new audio hardware, but the show was not off the air for more than a few seconds, and the thrashing about behind the scenes was not apparant.  We hope.  After a slow start, with nobody in the cavern, the audience built up to 17.  Are you all in the Fan Age tours when we begin?

A very good set of Richard Thompson songs was heard by up to fifteen people on a perplexingly quiet night in the cavern.

The 2016 Rock Humour show needed a bit of rejigging to avoid repeating tracks used the previous week, and the notes were  completely revamped.   Attendance was light, but there were a good number in the cavern and a fair amount of danceing got done.  And everybody was amused, for at least some of the time.

The preshow was mostly 10cc or Godley & Creme, after they had left 10cc.  The postshow was nearly all Bonzo Dog Band…  Both reliably amusing, and unlikely to be repeated any time soon.

A celebration of unusual sounds and instruments in jazz, rock and pop settings, the show was well attended by a changing crowd.  The instruments and sounds are revealed below.

As promised, this is a bass harmonica… 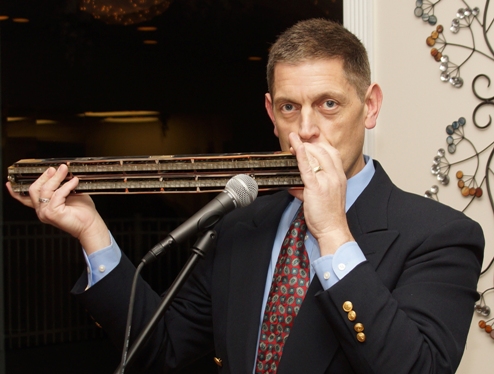 and this is Tommy Morgan, who played it on Good Vibrations. The Remastered Celebrations show coincided fortuitously with the opening of the first new ages in Uru Live for 13 years, giving us a very good reason to celebrate. The remastering was minimal in terms of the content, changing just one track in the main show and adding more to the pre and postshow sets. The audience figures were very pleasing, up to 35 at one point, and an indication that some of the old hands and new arrivals brought in by the event came along to join us too.

Our sixth annual Review of the Year was conducted by Edison Rex who chose his favourite tracks from the shows of the past twelve months.   We were joined by a large audience on the plaza and had 23 listeners, very gratifying for our “greatest hits of 2019/20” show.

The Remastered show was very well received, with the audience growing as the Uru panel at Mysterium wound down (it was good, by the way, and you can catch up with it on YouTube, like I did). More than 20 listeners, which is a good number for any niche Internet radio channel but a little less than our best ever numbers.

A big audience in the cavern for our 152nd show, with Astronomy as the theme. The show went well and we had a lot of good feedback from the audience. There may be another show on this theme, as we’ve found quite a lot of tracks that fit.
I’ve included some of the sciencey bits of the dialog just to show that we do do our research 🙂

Sirius was from Clannad’s 1987 album of the same name. It’s also the name of the brightest star in the night sky and derives from the Greek word meaning glowing or scorching. It is part of the constellation Canis Major, from which it gets its nickname The Dog Star.

It’s a spectral class A blue-white star and its brightness in our sky comes from a combination of its luminosity and its closeness – it’s the fifth closest star after Alpha Centauri, Barnard’s Star – location of the hyperspace roundabout, Wolf 359 – a favourite location in Science Fiction used by Terry Pratchett, Harry Harrison and The Outer Limits among many others. There’s also Lalande 21185, which is a very dim red dwarf.

The dawn rising of Sirius marked the onset of the annual flooding of the Nile in Egypt and of the hot, sultry “dog days” of the Greek summer. In the Southern hemisphere, Sirius was an important navigation reference for the Polynesians.

Orion is one of the most-recognised constellations in the night sky, being visible worldwide and having the distinctive belt and two very bright stars, Rigel and Betelgeuse. The belt’s stars are named Alnitak, Alnilam and Mintaka – the latter a name we find, slightly scrambled, in Uru. He’s often depicted as a hunter by many cultures, although some see a dancer or a deer and the North American Ojibwa called him Kabibona’kan, the Winter Maker, as his presence heralded winter. In other countries he’s a god, Väinämöinen in Finland, Nataraja (an avatar of Shiva) in India.

Closer to home, the Morning Star is a name given to the planet Venus when it is visible in the morning sky. Venus, with its cloud cover, is very bright when visible separate from the Sun, and to the ancient Greeks was thought of as two separate objects, the morning star and the evening star.

Earthshine is what you see at sunrise or sunset when there is a thin crescent new moon and you can see the rest of the moon illuminated by a faint glow. Sometimes called “the old moon in the arms of the new”, the shadowed moon’s surface is being lit by sunlight reflected from the Earth – that is, Earthshine.

Manned spaceflight has fallen into a hiatus since the retirement of the Shuttle, and public willingness to support it is low, as are government funds. I for one think that is shortsighted, and would quote Joe Straczynski’s words, as spoken by his character Jeffrey Sinclair in the TV series Babylon Five.

“No. We have to go there. And there’s a simple reason why. Ask ten different scientists about the environment, population control, genetics, and you’ll get ten different answers. But there’s one thing every scientist on the planet agrees on. Whether it happens in a hundred years or a thousand years or a million years, eventually our Sun will grow cold and go out. When that happens, it won’t just take us. It’ll take Marilyn Monroe, and Lao-Tzu, and Einstein, and Morobuto, and Buddy Holly, and Aristophanes, and all of this… all of this . . . was for nothing. Unless we go to the stars.”

The Remastered Doors show went down well and felt a lot more entertaining to me. We worked in some of the post-Morrison Doors and a bit of the spoken-word album An American Prayer that Morrison had recorded before his death and the remaining Doors reunited to put music behind some seven years later. Some live stuff too.

151 When Hell Comes Home: The Life and Crimes of Alice Cooper

A very successful show, despite (or was it because of?) the shock-rock nature of its subject, Alice Cooper. The show was assembled by Hugh, and I certainly learned a few things from it. Postshow was in memory of Ennio Morricone, and consisted of some of his movie scores.

Preshow: Alice Goes To The Movie